The Kalgidhar Trust, Baru Sahib recently reached the milestone of laying the foundation stone of its 121st school in the chain of Akal Academies in North India. Celebrating Akal Academy, Baru Sahib's 26th annual day on 16 November, 2013, the valley of divine peace was blooming with color and music mingled with the joyful cheers of colorfully dressed kids of all ages. The Trust's flagship school, Akal Academy - Baru Sahib, an internationally acclaimed co-educational fully residential CBSE affiliated school is located in the picturesque lush green valley and deep woods in the foothills of Himalayas in District Sirmore, Himachal Pradesh.

The ceremony was marked by the presence of parents of young siblings studying in this residential school. A galaxy of distinguished guests from all walks of life descended on to this remote hamlet to be a part of the annual celebrations. Mr. Ajit Singh Kohar (Cabinet Minister of Transport, Punjab) was the chief guest on the occasion. The chief guest inspected the parade by the Akal Academy students, who presented a march past before the start of the proceedings.

The annual day celebrations commenced with the message of world peace and universal brotherhood by releasing colorful balloons, which brought forward a roar of cheers from the 5000-odd audience. It was followed by a 32-piece traditional string instruments orchestra by the students of Gurmat Vidyalaya, who created a blissful divine environment by rendering Gurbani stirring the souls of everyone present.

Dr Neelam Kaur, Principal, Akal Academy, Baru Sahib in her annual report elaborated on the milestones achieved by the students of various Akal Academies established in North India. She welcomed the august gathering, visiting dignitaries and guests. In her inaugural speech, she emphasized on the need and significance of value-based education synthesized with modern scientific education that is being imparted in Akal Academies. She said, "The excellent results achieved by the students of Akal Academy, Baru Sahib in grade X & XII CBSE exams, have brought laurels to the school. All the students appeared in these board exams had the first division and 92 students had a perfect score of CGPA-10. Other than these, students from Akal Academies from rural areas of North India appeared in the CBSE exams and all passed in first divisions. Invariably, in almost all districts where our schools are located, the topper was an Akal Academy Scholar."

Further announcing the expansion plans of Akal Academies, she announced, "Apart from 101 functioning schools, 20 more new schools are to commence in the next academic session taking the total school strength to 121. One IB school is also being envisioned at Baru Sahib."

The Hon'ble chief guest S Ajit Singh Kohar gave away the prizes to the scholars. In his address, he said, "It is my good fortune that I have been invited for this sojourn to the valley of divine peace. I am spell bound to see the type of value-based education being imparted to the students of Akal Academies, which are the need of the hour and only good humans like the ones produced at Akal Academy, Baru sahib, would be able to stall this chaos." He appreciated the efforts of Baba Iqbal Singh Ji in nurturing the Akal Academies, which were bringing laurels in all the fields." He further shared, "I believe this is the real and true education. Whilst earlier I was wondering whether Akal Academy could meet up to the standards of its neighboring competition in this area. I am happily proved wrong. I am impressed with the dedication of the team at Akal Academy and wish them all the best in their future endeavors."


The annual day celebrations concluded with the prize distribution. It was followed by the holy address by Hon'ble Baba Iqbal Singh, President of the Kalgidhar Trust and the divine spirit behind Rural Education Revolution. Baba Ji, as he is lovingly called by all, blessed the audience with pearls of divine wisdom. He emphasized the need of faith on the Divine and to lead a true and spiritual life while performing all the worldly duties. He also delved on the various projects being undertaken by the Trust, which he believed, "someday, shall ultimately lead the world to permanent peace". He thanked all the present guests, parents, children and volunteers for making this event a successful one. 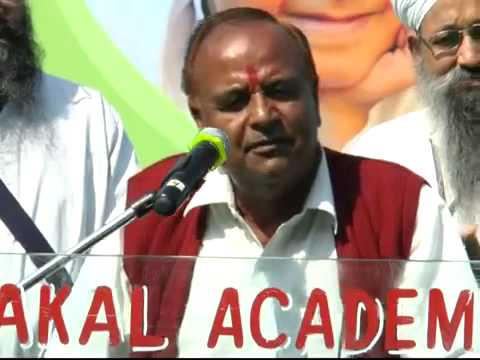